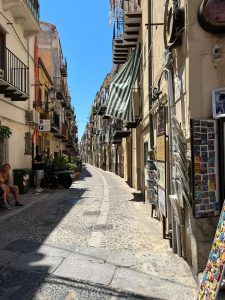 Buongiorno, from the beautiful city of Palermo! After a long concert yesterday, the staff thought it would be best to use the day for (much-needed) R and R as we embark on our next city. We packed our belongings, shut the case of our instruments, and headed first to the picturesque town of Cefalù (Chef- ah- loo).

Discovered in the year 395 BC, Cefalù is a town just east of Palermo, situated on rocky ground with a strong slope, under an overhanging rock. Founded by the Ancient Greeks, Cefalù was most likely an outpost for the famous city of Himera. Later, it was conquered by the Arabs, followed by the Normans. This change in power is present in the unique architecture and art scattered around town. Cefalù is also known for its precious mosaics, a testament to the Byzantine influence rooted in the town’s history. 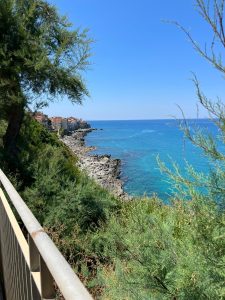 Upon our arrival in Cefalù, we were immediately enraptured by the transparent turquoise waters that surround its coasts. We got off the bus and walked to the main city center (near the Duomo di Cefalù). All of us were given two hours to find food and explore the area, so I got together with a group of friends and walked through the town’s narrow streets. Tucked in the back corner of an alley we found an excellent restaurant that seemed to be quite popular amongst locals. Our waiter recommended a traditional Cefalù dish called “Cefalùdese”. It had beef, eggplant, and Pomodoro sauce, and was hands down some of the best pasta I had on the trip! 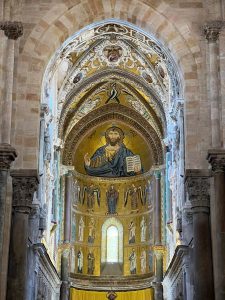 After lunch, we headed to the famous Duomo Di Cefalù. Words or pictures cannot describe how beautiful it was in that building. Each detail of the cathedral was thought out perfectly and shows the curiosity and creativity present in humanity hundreds of years ago.

The two hours flew by and we suddenly found ourselves back on the busses, heading to Palermo. In Siciliy, the city of Palermo is considered their “New York City”, being home to more than 850,000 inhabitants (quite a large number for Sicily). Getting a bus through NYC is hard enough, so imagine trying to fit two coach buses through narrow streets, surrounded by angry Italian drivers. It was truly a sight to see. But we eventually made it to our hotels (after walking 20 minutes) and spent the rest of the night relaxing and enjoying the amazing food in Palermo.

Excited for what tomorrow may bring! 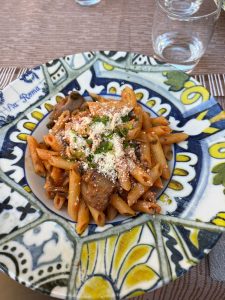 Time is running out to join one of GTCYS’ 10 orc