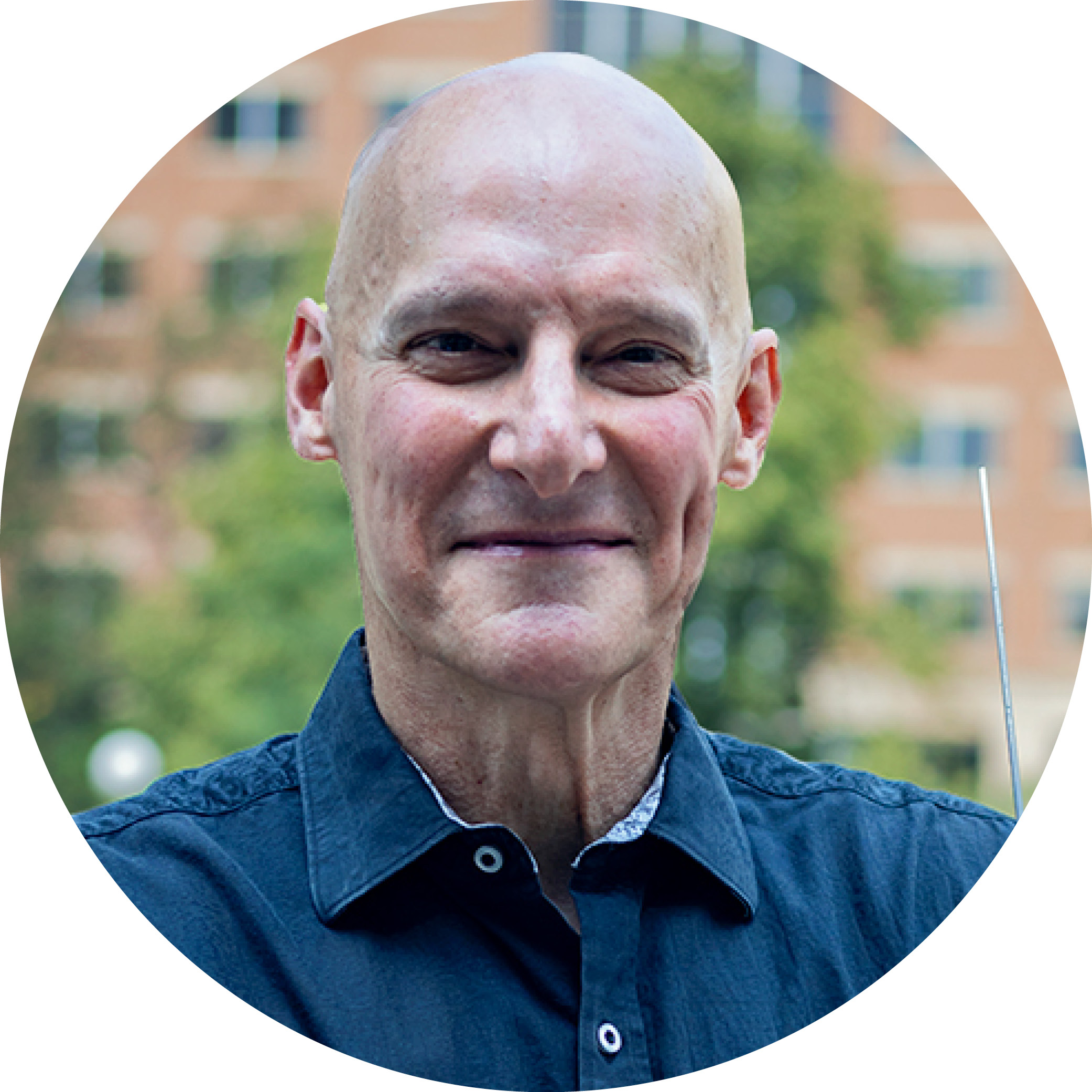 An active music educator, Mark Russell Smith was named Artistic Director of the Greater Twin Cities Youth Symphonies in the fall of 2012 and has served as Artistic Director of Orchestral Activities at the University of Minnesota since 2007.  In his role as GTCYS Symphony’s conductor he has led that orchestra on tours of Spain, Argentina, Poland, and Eastern Europe.  At the University of Minnesota, he was the instigating artistic force behind the University of Minnesota School of Music’s Britten Peace Project, which combined musical and historical study with community engagement, culminating in critically acclaimed performances of Britten’s War Requiem in Europe and America, collaborating with German and American music students, professional musicians, and the Nobel Peace Prize Forum. In 2016, he spearheaded the St. Matthew Passion project, again joining German and American students with study and performances on both sides of the Atlantic.  Recent projects include appearances with the Joffrey Ballet, conducting Stravinsky’s Rite of Spring, as part of a larger exploration of that work, commemorating its 100th anniversary.  Formerly Music Director of the Richmond Symphony Orchestra, a position he held from 1999 to 2009, Smith was praised for his innovative and approachable programming and is widely credited with fostering the orchestra’s unprecedented artistic growth.  He returned to guest conduct the orchestra in 2019.

Mark Russell Smith returned for his 12th season as Music Director and Conductor of the Quad City Symphony, and continues to demonstrate as a performer, educator and community leader, the consummate musicianship and passionate commitment to the art of music-making that have endeared him to audiences and musicians alike.  Since 2008, he has brought a newly focused artistic vision to the organization, and has welcomed YoYo Ma, Midori, Joshua Bell, André Watts, Garrick Ohlsson and other musical luminaires to the Quad City Symphony stage.  The orchestra continues to invest in its community, a vision of the utmost importance to Smith and the entire organization.

As a guest conductor, Smith enjoys a burgeoning international reputation that has already brought him engagements and re-engagements with prestigious American orchestras, including the St. Louis Symphony, the Houston Symphony and the St. Paul Chamber Orchestra. With the Minnesota Orchestra, he made his critically acclaimed Sommerfest debut in 2006 and made his subscription series debut in March of 2009, and returns regularly as a guest conductor.  An active opera conductor, he has appeared with the Virginia Opera, leading Mozart’s The Magic Flute to critical acclaim, among many others. Other recent appearances include debut performances with the Orquesta Sinfonica de Costa Rica and the Spokane Symphony, and a return to Verizon Hall with the Curtis Orchestra in an all-Wagner program with Eric Owens and Heidi Melton.  He regularly returns to his alma mater to lead the Symphony Orchestra of The Curtis Institute of Music, and led the orchestra on tour in China and Korea in the fall of 2011.  Smith’s debut at the Nomus Music Festival in Novi Sad, Serbia was met with critical and audience acclaim and led to immediate reengagement. Other recent and upcoming appearances include the Santa Barbara Symphony, Brazil’s Orquestra Sinfôniea da USP, the Hartford Symphony, Orquesta Sinfonica de Xalapa, the Phoenix Symphony, the Colorado Symphony, the Eugene Symphony, the Curtis Opera Theatre, the Jacksonville Symphony, the Berkshire Choral Festival, the Eastern Music Festival, the Tulsa Philharmonic, Orchestra London (Ontario), and the European Center for Opera and Vocal Art in Ghent, Belgium.

A champion of the music of our time, Smith was the Director of New Music Projects for the St. Paul Chamber Orchestra, and developed that orchestra’s Engine 408 series, working closely with living composers and added his unique perspective to enhance that orchestra’s great tradition of fostering new works. He again collaborated with YoYo Ma and members of the Chamber Music Society of Minnesota in Hún Qiáo (Bridge of Souls), a concert of remembrance and reconciliation featuring world premieres by Korean, Japanese, Chinese and American composers.  A firm believer in the use of technical innovation to reach world-wide audiences, he debuted in 2002 with the Winnipeg Symphony Orchestra, conducting the final round of the first Minnesota International Piano-e-Competition, where he led six concerto performances that were streamed live over the Internet.  He has led the Minnesota Orchestra in the Competition’s final round since 2004 and returns each summer.

Smith grew up in a musical family in Phoenix, Arizona where he began the serious study of conducting while still in his teens. He is a graduate in cello performance of the Juilliard School, where he studied with Claus Adam, and of the Curtis Institute of Music, where he studied conducting with Max Rudolf and Otto-Werner Mueller. While at Curtis, Smith was first prize winner in the National Repertory Orchestra Conductors Competition, and upon graduation, was named Assistant Conductor of the Opera Company of Philadelphia and the Philadelphia Singers. From 1989 to 1994, Smith served as Associate Conductor of the Phoenix Symphony Orchestra and from 1992 through 1999 served as Music Director of the Cheyenne Symphony Orchestra.  His dynamic personality, creative programming, and focus on outreach helped revitalize the Springfield (MA) Symphony, where he served as Music Director from 1995 through 2000.

Smith resides in Minneapolis, where his wife, Ellen Dinwiddie Smith, is a horn player with the Minnesota Orchestra.  They have two sons, Alexander and Noah.