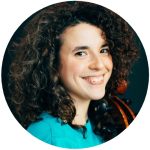 Rosa Thompson-Vieira, a native of Minneapolis, enjoys a dynamic and ever evolving career as a professional cellist and teacher in the Twin Cities. She serves as the Assistant Principal cellist – often filling in as principal cellist – of the Rochester Symphony and is on call as a substitute cellist for the Minnesota Opera and South Dakota Symphony. To name a few, Thompson-Vieira has appeared with touring professionals such as Michael Buble, 2Cellos and Broadway’s Tony and Grammy-winning Best Musical Hadestown.

Thompson-Vieira thrives in a broad range of musical avenues, which does not exclude her passion for chamber music. She has served as cellist in Roma Duo since 2014 and as a member of the Delphia Cello Quartet since 2018, participating as a Class Notes Artist for Minnesota Public Radio, giving educational performances to public school students in the Twin Cities and surrounding areas. Thompson-Vieira finds great joy in sharing music through performance as well as education. In 2021 she became a cello instructor for the Greater Twin Cities Youth Symphonies Harmony program, focusing on breaking down barriers in music education and creating a more accessible pathway for underrepresented students.  She received her Suzuki book 1 Certification in 2015 and uses a combination of traditional and Suzuki teaching methods. In addition to being on faculty at MacPhail, Thompson-Vieira has taught at the University of Minnesota – Morris, and is currently managing a private studio as well as holding a teaching position at Sarah Jane’s Music School.

Thompson-Vieira received both her undergraduate degree and masters degree from the University of Minnesota studying under Tanya Remenikova, a former student of the legendary cellist Mstislav Rostropovich. Previously she studied with Allison Wells at the Peabody Institute of the Johns Hopkins University. In her spare time she enjoys doing yoga, cooking meals with her partner and spending time with her dog Lewis and cat Iggy.