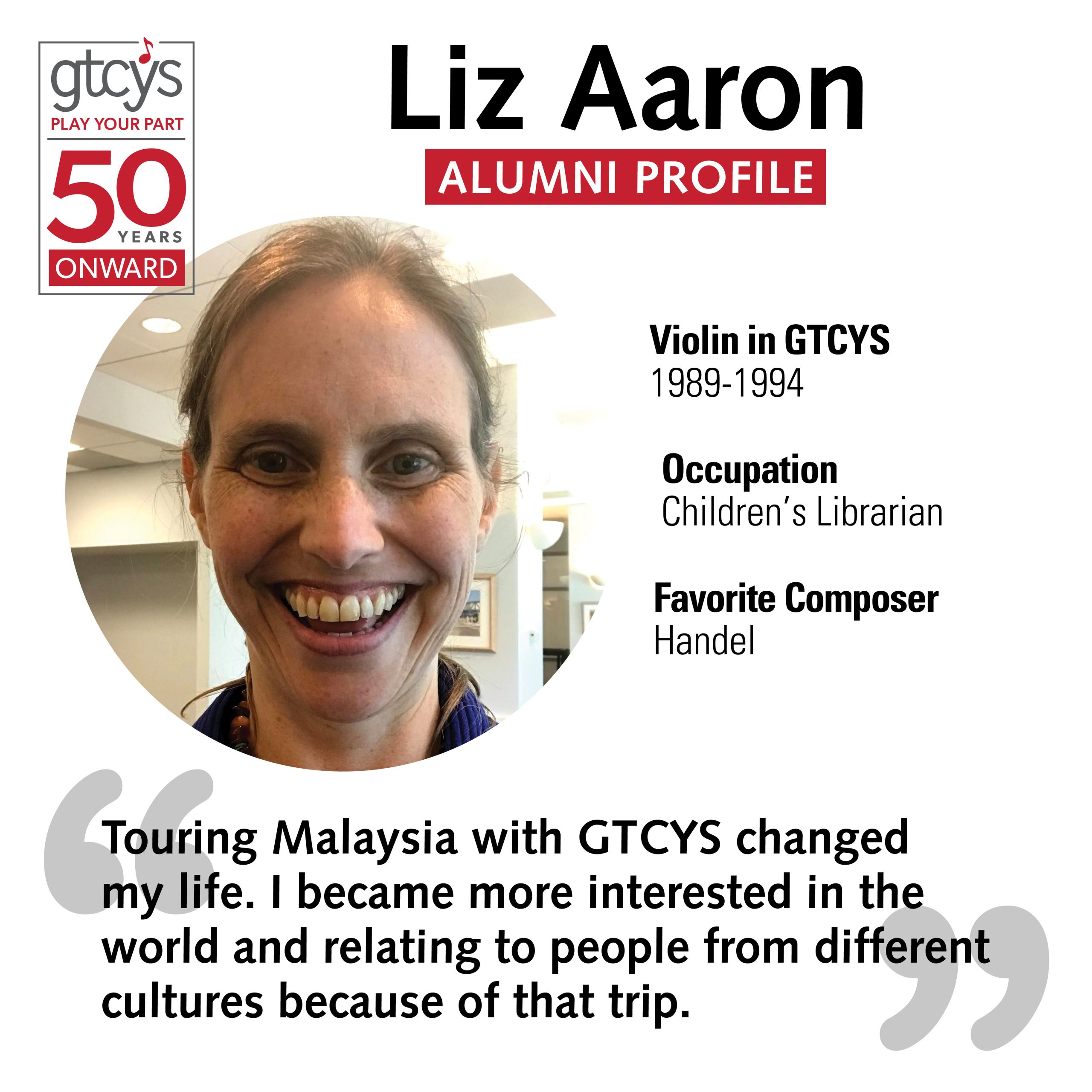 What skills or lessons did you learn in GTCYS that you still use today?
I was so excited to finally get into Symphony on a “tour” year. I thought we would go to France or Germany, but we went to Malaysia. Although it wasn’t what I was expecting at first, it was amazing and completely changed my life. To see people living normal lives on the other side of the world in a place I hadn’t even heard of was profound and had a huge effect on the person I have become. I kept in touch with a pen-pal from a youth orchestra there and we even met up as adults in California!

Why do you think GTCYS is important for students now?
It’s great to have a chance to play and learn to work with a large ensemble at a really high level. It was exciting to have the opportunity to challenge myself in that way during high school. So many pieces I hear now on the radio are more meaningful because I remember playing them in GTCYS. Also, touring Malaysia changed my life. I became more interested in the world and relating to people from different cultures because of that trip. I’ve now been motivated to live in several countries: Mexico, Hungary, and Japan. I even reconnected with a violinist I met in Malaysia – we now live about 1 hour apart in California! I hope current students can have similar life-changing experiences through GTCYS.

How does music still play a part in your life?
During the pandemic one of my neighbors who is at New England Conservatory studying piano was home for the entire year. Most Sundays he would host a “sidewalk concert” where he opened all the doors and windows and neighbors would sit on the sidewalk and listen. It was such a relief to have a way to connect to other people during such an isolating time. I saw how much his music brought joy and camaraderie to the neighborhood. One Sunday he asked if anyone would like to play in the concert, so I played something I had memorized in middle school. Even though I haven’t learned any new pieces in years, I was still able to bring happiness to my neighbors through music.

What is your favorite composer or piece of music?
So many favorites. I love early music and baroque; Handel is one of my favorites. I also love Tchaikovsky and most of his work. Chopin’s nocturnes for piano are so lovely, and recently I’ve been listening to piano pieces by Satie. Holst’s Planets is so emotional for me, especially Saturn. And I love the grandeur of The Great Gates of Kiev at the end of Mussorgsky’s Pictures at an Exhibition. I don’t generally like Aaron Copland, but his Fanfare for the Common Man is inspired.

What’s a fun fact about yourself?
I became a children’s librarian when I was 35 years old. I finally found a perfect job for myself! I have two wonderful boys, 5 and 9 years old. They both love punk rock, like their dad. I haven’t given up hope to teach them to play classical music yet, though!

What do you hope to see from GTCYS in the next 50 years?
I hope GTCYS can keep inspiring young musicians and holding them to very high standards. I think that opportunity as a teen was invaluable for me, even though I didn’t become a professional musician. Almost 30 years later I still enjoy playing and bring joy to others through my music.